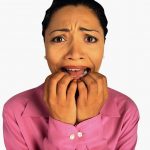 Very heavy bleeding during your period (the medical term is menorrhagia) can be a troublesome problem. If it doesn’t affect you, you probably know someone who has periods so heavy it interrupts normal daily activities like going to work or enjoying an outing with friends.  There are many possible causes of heavy bleeding and thankfully more options than ever to manage Dear Aunt Flow—even when she’s overstaying her welcome.

I bleed a lot during my period and sometimes randomly: how do I know if I need to see my doctor?

According to the National Institutes of Health, there are a few factors you can watch for to identify heavy or abnormal bleeding and help you know if you should see your doctor. They include:

The key to heavy bleeding is noticing how many pads or tampons you go through. If you have to change a pad or tampon hourly two or three times in a row because it’s completely soaked through, you’re bleeding is too heavy and you may need to see your doctor for an exam.

So what makes my period so heavy?

That’s not a cut and dry answer. In order to find out why your period is more like Niagara Falls your doctor will need to examine you and maybe do a few tests.  Causes of heavy bleeding may not be visible with just a pap smear and pelvic exam, and could be hormonal in nature. In this case, your doctor may need to do blood work to look for hidden conditions.

Tests you need will be determined by your doctor, but here are some of the common ones:

Treatment will be based on the cause of your symptoms.  If you have a hormonal trigger, you may be prescribed a medication to take in a pill form, or you may be given birth control if you are able to take it. Even if you have had a tubal or other permanent birth control option, you can still take a pill to reduce the amount of bleeding you have each month.

Endometrial ablation is another popular option today. Ablation is a way of destroying the lining of the uterus (the part that bleeds each month).  Some women have only light periods after an ablation and others have no periods at all. Ablations don’t require surgery and can be done right in your doctor’s office. Small tools are passed through the vagina and cervix into the uterus and will destroy the lining with radiofrequency waves, cold, heated fluids or microwave energy. It will depend on how your doctor does the procedure.

Surgery may be needed in some cases. If you have fibroid tumors or other changes inside your body removal of the tumors or the uterus itself (hysterectomy) may be needed.

Dr. Hessel is here to help you find the cause of your heavy bleeding and present you with options for management. Make your appointment today and get started on the way to better health.